We celebrated my son’s 8th birthday party this weekend, and we managed to pull off a successful “Star Wars” party.

If you are here to find cute decorations and food/cake ideas, you have come to the wrong place (sorry- haha).  But if you would like some super FUN party game ideas, look no further!

Cooper, told me that this has been his best birthday party.  All of his guest had a blast too!! 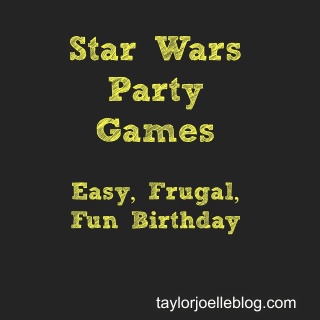 We created a fun invite to get the boys really excited to attend.  I designed this in just a few minutes using picmonkey.com

The thing that made this party easy and successful is that I recruited help.  I had my 10 year old daughter draw the signs, and then I recruited older neighborhood kids and a nephew to help organize the games.  Here’s the sign that my 10 year old made for the guests to see as they arrived.  When I had them all together, I told them that they would all leave this party a Jedi if they completed each activity.

I gave my nephew (who knew a lot about star wars) a bunch of note cards and the task to create a Star Wars scavenger hunt.  He did a great job and the boys looked so excited going from clue to clue.  At the end of the scavenger hunt they found a box of prizes (some cheap star wars rings I bought off amazon).

We did a very simple, quick craft.  I found some lego star wars images and printed them off  on photo paper (card stock would work too).  The boys chose a clear rock, traced it around the image and cut inside their traced line.  Then they modpodged the front of the image and the back of the rock and stuck them together.  We then hot glued the magnet on the back for them.

We made light sabers out of dollar store pool noodles.  Simply cut the noodle in half and then use black and grey duck tape on the bottom to decorate.   We then made storm troopers by drawing faces on the white balloons.

The object of this game was to see how long they could keep the balloon in the air using their light saber. 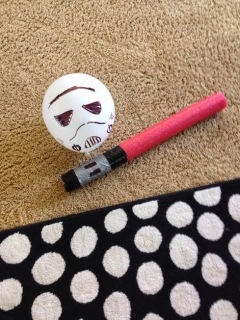 We put a bucket of legos on the table and told them they had 10 minutes to build their very best star wars ship.  This one was so easy and very successful.

This was a favorite activity.  I don’t know much about star wars so after we set up a course, I asked Cooper what each obstacle could be (example, lava, sarlac, the cave, etc..).  We found a bunch of objects around the house.  The first thing they needed to do is walk on some wooden boards without touching the grass (hot lava) holding a spoon with a decorated storm trooper egg.  Then they needed to go down the slide (aka sliding down their ship), through the wooden boxes (aka their cave) and into the hoola hoops without touching the lava.  They needed to pick up a squirt gun and aim it at the storm trooper, than go through the lasers.  For the lasers, we tied a bunch of red string.  They had to get to the other side without touching that string.

The object of the game was to pop as many bubbles with their bubble light saber wand as possible.  We had a bubble machine already, so we used that instead of blowing our own bubbles. 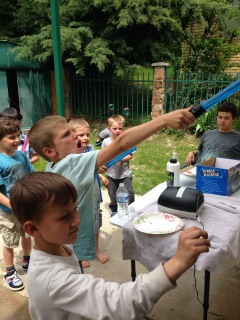 We actually forgot to do this activity for the party – oops.  My kids are really into four square.  So they wanted to draw a four square board with chalk outside and play it using Star Wars names.

My kids really enjoy the app Video Star  We thought it would be fun to use a star wars song and film each child for a few seconds.  After opening presents, we uploaded the video to YouTube and streamed it to our TV so they all could watch.

At the end, we gave them each their pool noodle light saber and let them battle.  They were wild and crazy and loved it!